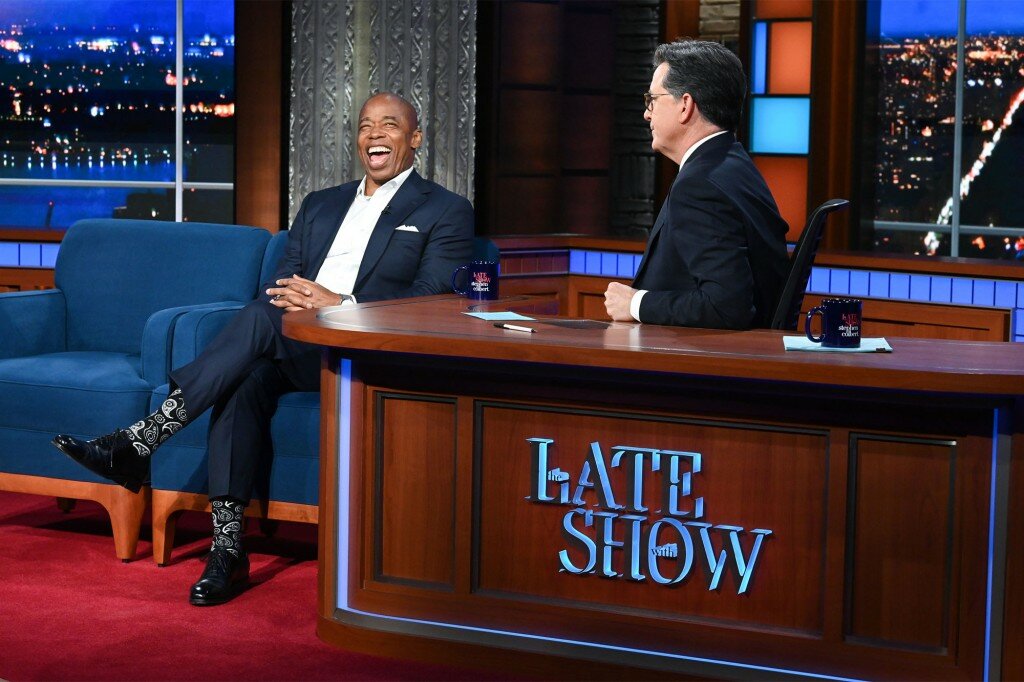 “He’s like funny, funny — not like politician funny,” an audience member gushed to The Post after the filming of the interview that is set to air at 11:35 p.m.

After offering Colbert some New York City- centric goodies, Adams retrieved from his coat what resembled a “dime” bag of marijuana and joked to the host that he’d have to hand it over after the show.

Playing up the bit, Colbert said he doesn’t partake in such an activity, according to the audience member.

“Marijuana is legal and Eric supports its safe personal use” Adams’ campaign spokesman, Evan Thies, told The Post — but added that the mayor-elect didn’t actually purchase any pot for the show.

“He was having a good old time,” the audience member said of the Big Apple’s future mayor.

During the sit-down, Colbert quipped that Adams “enjoy[s] the club scene as well” after bringing up the soon-to-mayor’s election night outing at Zero Bond.

Adams quickly corrected him and noted in the same night he also hit up hotspots Casa Cipriani and Sugar Hill.

“I’m the mayor(-elect), this is a city of nightlife — I must test the product. I have to be out,” Adams said, according to a pre-broadcast clip of the show.

“If you’re going to hangout with the boys at night — you got to get up with the men in the morning. And I’m up at 5 a.m. every morning,” he said.

Adams, a chiseled vegan, talked about how he routinely consumes his green juice — prompting Colbert to joke that he’s “hotter” than Mayor Bill de Blasio.

Along with the goodies, the mayor-elect also gave Colbert an envelope with the note: “Thank you for hiring my son,” according to Thies.

Adams’ son, Jordan Coleman, works in the TV and film industry. He was a one-time apprentice on the digital team and script department for Colbert’s show.

Audience members at the CBS taping were all given tickets to the hit musical “Chicago.”