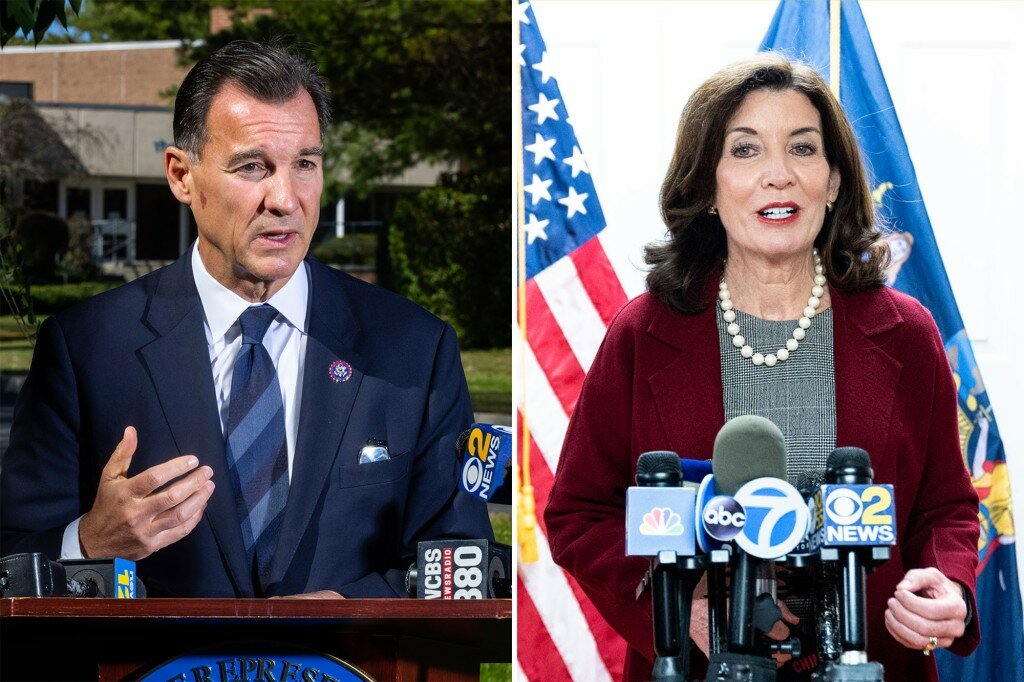 Suozzi, a Democrat who also represents a part of Queens, dashed a letter to Hochul responding to the Post report that she terminated popular Italian-American liaison Dolores Alfieri, an appointee of predecessor Andrew Cuomo.

“As a former Mayor and County Executive, I recognize your authority to make personnel decisions and to place people of your choosing in important positions. My experience has taught me however, that it is often helpful to consult with the constituency most affected by your decisions. In this case, the Italian -American community believes this is now the second time in the last month they have felt blind-sided by your actions,” Suozzi said.

Suozzi, who is Italian-American and has deep ties to the community, said some Italian-American advocates are also seething over her signing of a proclamation naming October 11th as “Indigenous People’s Day” — considered a slight against Italo-Americans who revere Columbus Day. Hochul marched in the Columbus Day parade.

“As you know, that was not well received by the Italian-American community. The symbolism of Columbus Day is deeply personal for many Italian-Americans, including myself,” he said.

Suozzi asked if Hochul will scrap or fill the position of director of Italian-American Affairs.

“If not, do you plan to consult with Italian-American civic and cultural organizations on finding a replacement?” Suozzi asked.

“I know that you face many difficult challenges, but I hope you agree with me that seeking advice and consul from the vast and vibrant Italian-American community on issues of importance to them is a priority that should not be overlooked.”

In response to the Suozzi letter, Hochul spokesman Avi Small said, “Governor Hochul has always been a steadfast supporter of Italian Americans and will continue to stand with this community throughout her administration.”

The governor’s office would only say the position for Italian-American Affairs is vacant.

“Gov. Hochul has a right to bring in her own team. I have no issue with that,” said Carlo Scissura, chairman of the Federation of Italian American Organizations in Brooklyn, and head of the New York Building Trades Congress.

“Come on. Let’s move on from this. There are bigger issues to deal with,” he said.

It’s not the first time Suozzi has trolled Hochul.

The congressman, a moderate, went to Hochul’s home turf of Buffalo last month to personally endorse the re-election of incumbent Mayor and write-in candidate Byron Brown over the Democratic Party nominee Indian Walton, a socialist.

Hochul stayed neutral in the contest. Suozzi was the only prominent elected official to back Brown, who won re-election in the general election after Walton defeated him in the party primary.

Meanwhile, Suozzi has checked in with a number of campaign consultants — including those who worked for candidates in the Democratic primary for New York City mayor — about joining his campaign team for governor.