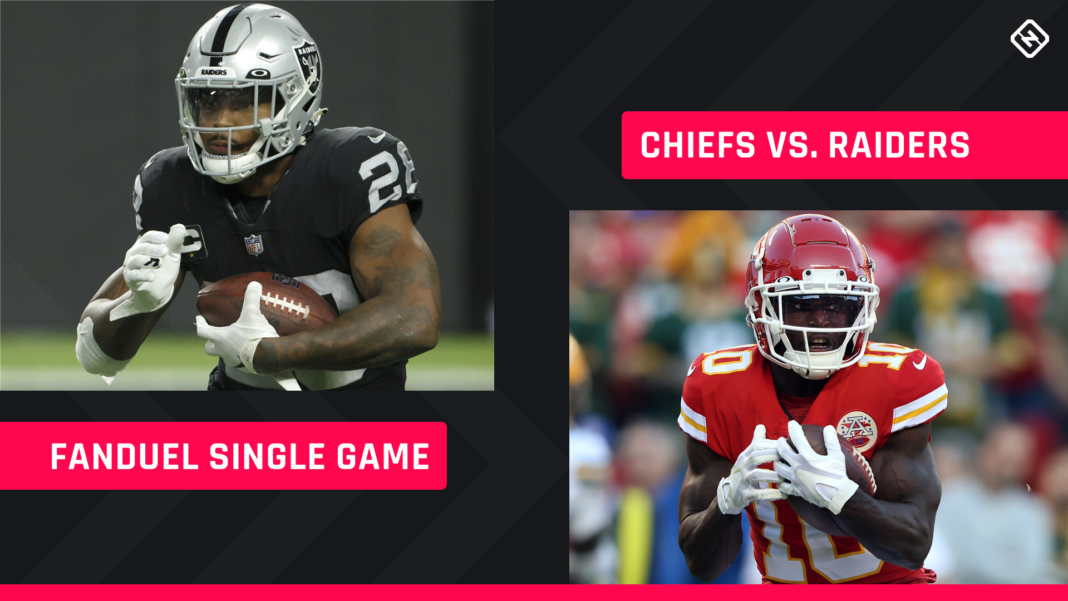 The Week 11 Sunday Night Football slate features a divisional showdown between the Raiders and Chiefs. As far as our NFL DFS strategy is concerned, we’re going to zig with our approach. Our FanDuel single-game lineup is fading the quarterbacks in favor of their playmakers. Patrick Mahomes’ struggles are well documented, and $17,000 is too much to pay for someone who’s surpassed 30 FanDuel points just twice this season. On the other sideline resides Derek Carr, who carries a $15,500 price tag despite more single-digit duds on his ledger (one) than 30-plus-point gems.

Here are the notable scoring settings for FanDuel single-game contests: The point total for the “MVP” is multiplied by 1.5, but he doesn’t cost any additional money like the “Captain” in DraftKings Showdown contests. FanDuel’s default scoring is half-point PPR and four-point passing TDs, and there are no bonuses for 300-yard/100-yard games like on DraftKings.

Waller has been relatively quiet since he saw a staggering 19 targets in Week 1, and his 11 targets last week marked only the second time he saw double-digit passes thrown his way. Waller and Henry Ruggs III certainly didn’t share the same branches of the Raiders route tree, but the latter’s absence will mean more chances for the other pieces of this offense, including Waller.

Hill doesn’t need Patrick Mahomes to be the full vintage version of himself — he just needs his quarterback to make a few throws. In spite of Hill’s relatively disappointing season to date, we know how quickly he can put a massive performance together. He’s still erupted for games of 42.1 and 31.6 FanDuel points this season and is more than capable of posting another winning number on Sunday night.

After delivering back-to-back 20-plus FD-point efforts to open the season, Kelce has been a bit of a damp blanket in his own right. On a one-night basis, however, Kelce is about as appealing a weapon as there is. Kelce hung an 8-127-1 line on the Raiders in their most recent matchup, a Sunday night contest in November 2020, and he’s a solid bet to post another well-fed stat line.

It’s been a bit of a mixed bag for Jacobs, who has shown some good things — namely, increased passing-game usage that will yield career bests in targets and receptions — and some bad things — specifically, an inefficient 3.8 yards per carry. A number of nagging ailments have hampered Jacobs this season, but he’s not on the injury report this week. With the way teams try to grind out wins against the Chiefs, it won’t be a surprise to see the Raiders hop on his shoulders.

While the similarities between Jackson and Ruggs are obvious, D-Jax probably won’t represent a like-for-like replacement. Perhaps that means fewer snaps and fewer targets; perhaps it means a more effective deep threat. To be fair, Ruggs was having a solid season, but Jackson has put together a career of solid seasons. It’s not a small ask, but if Derek Carr and Jackson can microwave some chemistry, fantasy owners could receive the big play or two they need in this spot.