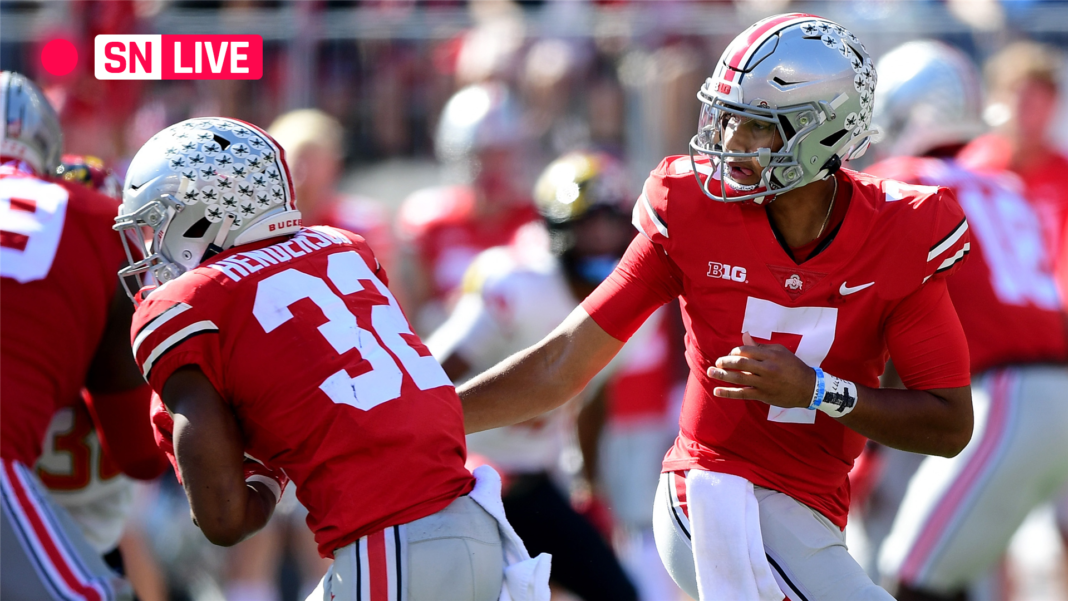 Ahead of an annual marquee matchup, a once-promising season for Penn State has seemingly come off the rails, while a once-worrying start for Ohio State seems to be a distant memory.

The Buckeyes are No. 5 in the latest AP Top 25 and Coaches Poll, winning five in a row after starting the season 1-1. They had defensive woes early, but have yielded just 44 points in their last four games; they’re beating opponents by 47 points per game. Penn State, meanwhile, started off 5-0, but has fallen off starkly and quickly, losing to Iowa 23-20 without a fully healthy Sean Clifford and then losing to unranked Illinois 20-18 in nine overtimes in Week 8.

Clifford is expected to be close to, if not at 100 percent for the Nittany Lions, but it still may not be enough to counteract Ohio State’s offense, which includes quarterback C.J Stroud, receivers Chris Olave and Garrett Wilson and running back TreVeyon Henderson. The Nittany Lions also don’t have history on their side: James Franklin hasn’t beaten Ohio State since 2016, and Penn State hasn’t won in Columbus since 2011.

Ohio State won last year’s meeting 38-25 in Beaver Stadium, and will look to continue its dominance over its longtime Big Ten foe in a game with potential College Football Playoff implications.

8:47 p.m.: There’s a penalty on Penn State and it’s a loss of down. Penn State goes for it on fourth-and-5 but Clifford gets sacked. OSU takes over from the Penn State 49.

8:41 p.m.: It’s quickly third-and-7 following the big gain from Washington and Penn State calls its second timeout of the half.

8:40 p.m.: It’s a 25-yard gain for Penn State as Clifford hits Parker Washington for the gain.

8:36 p.m.: TreVeyon Henderson’s woes continue. He’s swallowed up on third down and OSU punts it away to the Penn State 11 yard line.

8:35 p.m.: Another penalty for snap infraction on the Buckeyes. Second-and-11 pass is complete to Smith-Njigba for 9 yards to the Penn State 45.

8:31 p.m.: Stroud completes a pass to Miyan Williams for 12 that was originally ruled a fumble. Call is overturned and Buckeyes get first-and-10 from their 47.

8:25 p.m.: The Buckeyes will start the second quarter looking at third-and-7 from their own 21.

8:23 p.m.: Ohio State is looking at third-and-2 following the run from Miyan Williams but the Buckeyes get hit for a snap infraction and get driven back 5 yards to end the first quarter.

8:21 p.m.: Penn State goes three-and-out following the field goal. Nittany Lions punt it away and Ohio State takes over at its own 18.

8:20 p.m.: John Lovett fair catches the ball and Penn State will take over.

8:13 p.m.: Ohio State gets called for a false start, bringing up second-and-13 from the Penn State 18. James Franklin calls a timeout on defense, Penn State’s first of the half.

8:10 p.m.: Penn State gets hit with an unncessary roughness call after Joey Porter lays a late hit on Garrett Wilson. First-and-10 for the Buckeyes from the Penn State 34.

8:06 p.m.: Ohio State will take over from its own 25 after the Penn State touchdown.

8:01 p.m.: Keyvone Lee is the rusher this time, taking it 11 yards to the OSU 5 and putting Penn State in nice position to strike early.

8:00 p.m.: Parker Washington hauls in a 32-yard grab out of the slot and puts on a few nice juke moves to gain big yardage. First down Penn State at the OSU 16.

7:57 p.m.: Clifford’s first pass attempt of the game is completed to tight end Brenton Strange for 8. Third-and-1 from the Penn State 31.

7:56 p.m.: Lovett follows that up with a 5-yard run and Clifford keeps it for the first down.

7:50 p.m.: Stroud hits Wilson again for another big gain, this one for 12 yards. Ohio State is marching early.

7:48 p.m.: The two teams trade fumbles, as OSU sacks Sean Clifford, who loses the ball. Buckeyes take over from their 47.

7:47 p.m.: Penn State forces a fumble on a catch by Jeremy Ruckert and takes over at the Ohio State 46.

7:39 p.m.: Both teams have taken the field, with kickoff coming up shortly. Ohio State opens as 20.5 point home favorites.

Ohio State vs. Penn State will kick off at 7:30 p.m. ET from Ohio Stadium in Columbus, Ohio.

This matchup between perennial Big Ten powers will air on ABC. Former State College resident Chris Fowler will handle play-by-play duties with former Buckeyes quarterback Kirk Herbstreit joining him as the analyst. The two will be accompanied by Holly Rowe, reporting from the sidelines.