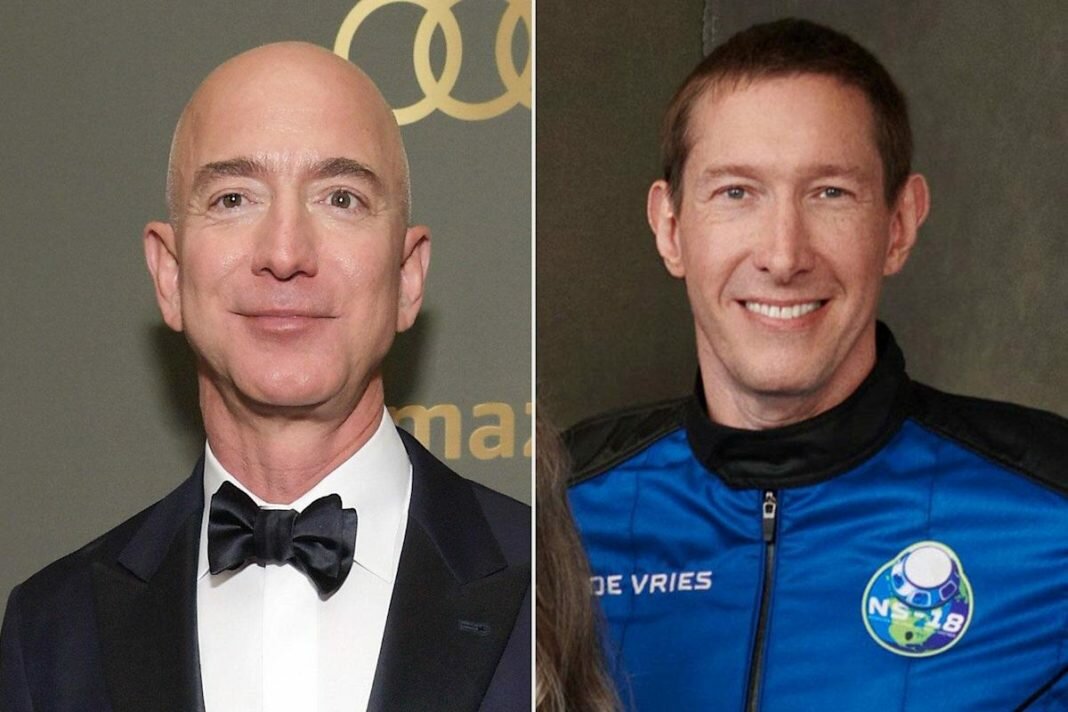 Jeff Bezos is mourning the loss of his friend Glen de Vries after the tech mogul tragically died in a plane crash on Thursday.

De Vries, who recently flew to space on a rocket launched by Bezos’ aerospace company Blue Origin, was identified as one of two victims killed in the New Jersey crash, State Police previously confirmed to PEOPLE. Thomas P. Fischer, 54, was also killed during the incident.

On Friday, Bezos spoke out about the tragedy on social media, calling the 49-year-old “a visionary, an innovator [and] a true leader.”

“Such a tragic loss,” Bezos, 57, wrote on Instagram beside a photo of de Vries smiling next to a model Blue Origin rocket. “Warm and full of life, Glen made us laugh and lit up the room.”

“Lauren and I are heartbroken and will remember the precious time we got to spend together,” the Amazon founder continued. “Our deepest sympathies are with his partner, Leah, and all his loved ones. The world lost you too soon, Glen.”

“Such a painful loss today. We got to know Glen de Vries, an incredible man, and his partner Leah last month,” she wrote. “Leah’s love for Glen was visible every time we saw them together.”

“When he took off for space she gripped my hand so tight it hurt. Thinking of that moment today with a broken heart,” Sánchez, 51, continued. “Our deepest sympathies go out to Leah and Glen’s family, we are so saddened by the tragic news.”

In a statement, Blue Origin wrote: “We are devastated to hear of the sudden passing of Glen de Vries. He brought so much life and energy to the entire Blue Origin team and to his fellow crewmates. His passion for aviation, his charitable work, and his dedication to his craft will long be revered and admired.”

De Vries was one of four crew members aboard the New Shepard rocket that blasted into space for the NS-18 mission last month.

It had been a memorable moment for de Vries, who previously said that going into space was his “oldest, and lifelong enduring, dream” in a social media post.

In addition to his interests in aviation and space, de Vries was also a trustee for his alma mater, Carnegie Melon University, and the co-founder of Medidata Solutions, a tech company that develops software as a service, per their website.

RELATED: ‘Doting’ Father and Daughter, 14, Identified as Victims of Ga. Plane Crash That Also Killed 2 Others

In a statement to PEOPLE, the New Jersey State Police (NJSP) confirmed that the fatal plane crash unfolded just before 3 p.m. on Thursday in Hampton Township in Sussex County. State police said troopers responded at 2:50 p.m. after receiving a report of a small aircraft crash and discovered two fatalities at the scene.

According to an online incident report from the Federal Aviation Administration (FAA), the two victims, a pilot and passenger, were the only people on board at the time. They were later identified as de Vries, of New York, New York, and Fischer, of Hopatcong, New Jersey, NJSP confirmed.

In their report, the FAA stated that the single-engine Cessna 172 plane was “destroyed” in a heavily wooded area but the cause remained unknown. The agency did not identify who the pilot of the aircraft was.

According to the Fischer Aviation website, de Vries began his private pilot training with Fischer, who owned the aviation company, in February 2016.

The NJSP said the FAA will be the lead investigating agency.

Bezos and Sánchez’s tributes were two of many that poured in for de Vries as news of his death continued to spread on social media.

“The world lost a visionary,” Nadia M. Bracken, who works at Medidata Solutions, wrote in a tribute on Twitter. “May his legacy of innovation in the life sciences industry live on. #innovator #restinpeace #spaceman”

“CMU is devastated by the loss of alumnus and trustee Glen de Vries,” Carnegie Mellon University President Farnam Jahanian said in a statement. “Glen was one of CMU’s greatest advocates. His passing is a profound loss for a world that has already benefitted so much from his brilliance and compassion.”

“To be in Glen’s presence was to be immersed in his exuberance and zest for life, and I am filled with tremendous sorrow that we will no longer be able to experience this gift or share it with others,” Jahanian added.

In a statement of his own, David Coulter, the chair of the CMU Board of Trustees, said, “Glen loved Carnegie Mellon, and believed with every fiber of his being in the important work being done here. The loss of one of our greatest advocates, and a friend to so many in this community, is devastating.”