Cam Newton on how well he knew Panthers’ playbook: ‘Two touchdowns worth’ 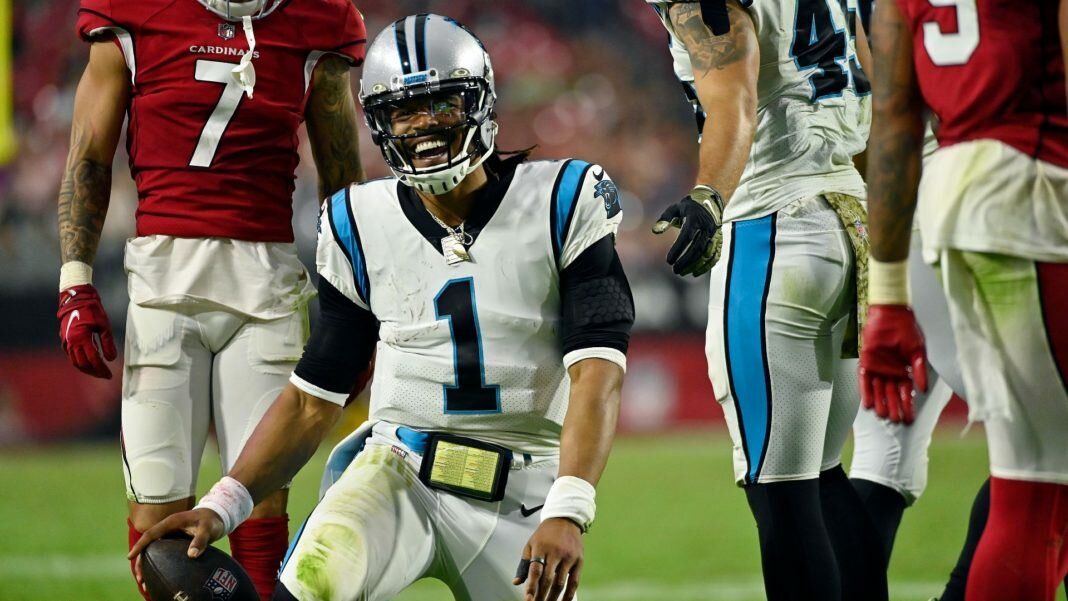 Cam Newton didn’t need too much time to get caught up on the Panthers’ playbook.

The veteran quarterback was making his return to Carolina on Sunday after signing with his former team on Thursday. In the team’s road matchup against the Cardinals, he came into the game for goal-line situations to give Arizona’s defense a different look.

It worked, as he rushed for a touchdown on his first rushing attempt and he passed for another score on the next drive. After the game, a reporter asked him how much of the playbook he knew coming into the game?

There was certainly some excitement for Newton on the first scoring play. After rushing in, he took his helmet off and shouted to the TV cameras, “I’m back.”

He explained after the game that he told Panthers coach Matt Rhule that it wouldn’t happen again, but that it was a moment of perspective from him, considering where he was last week.

“I put it like this, this time last week, I was eating a bowl of cereal,” Newton said. “That just puts things into perspective. You know, after going to church, being with my children, and you know, really not even watching football, it was just about you know maximizing the person that I need to be and so for that it was just all just a rush of emotions.”

MORE: Cam Newton opens up on why he was cut by the Patriots

It’s been a whirlwind year for Newton, who entered the 2021 season expecting to at least compete for the starting quarterback with the Patriots, if not win the job outright. But Newton was cut before the season began, handing the starting role to Mac Jones.

Following an injury to Sam Darnold, Newton was brought back by Carolina. Though the team still had P.J. Walker at quarterback, Newton was signed for $10 million, hinting at the possibility that he will take over as the starter.

During Sunday’s 34-10 win, Newton only attempted four passes and rushed three times. He completed three passes for eight yards with a touchdown, and rushed for 14 yards and another score.

MORE: Why Cam Newton didn’t start for the Panthers in Week 10

Newton felt it was a storybook way to return to the Panthers, playing in the stadium where he played his final college game and opposing the team he faced in his NFL debut.

And while he scored two of his team’s three touchdowns, he gave credit to Walker, running back Christian McCaffrey and the rest of the Panthers for helping put him in a position to score.

“I’m just blessed to be in a community that has accepted me with open arms. And who knew what today was going — how today was going to happen, but I’m just trying to do my part, you know,” Newton said. “I refuse to take just take full credit because I wouldn’t have got down there without PJ on a third third down with C-Mac being resilient throughout the whole time. It’s so many things that it’s easy for people to kinda look over. But yet, you know, I really should thank C-Mac. He gone two times, he got me down to the one-yard line and I just ate the scraps.”

MORE: Why the Cam Newton-Panthers reunion is a bad idea for Carolina

Newton might have a decent understanding of the playbook back in Carolina, but he said it will take him some more time to get a feel for the nicknames on the team. He explained that it’s only been one work-week, and that he needs to sit down and analyze the situations.