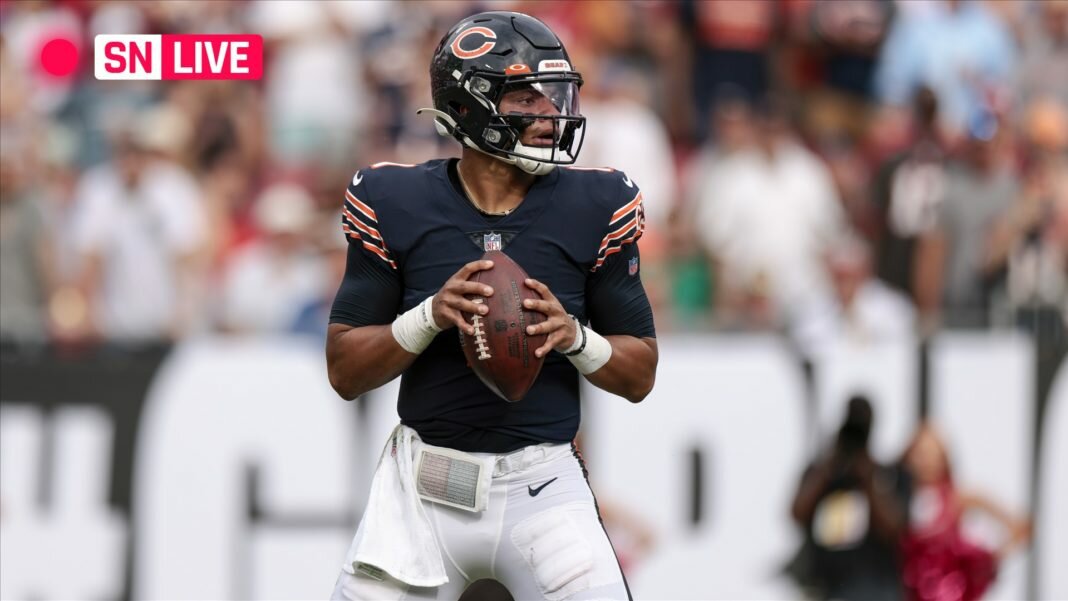 Coach Matt Nagy is on the hot seat as the Bears attempt to earn their first win since Week 5.

The Bears will look to snap the Steelers’ three-game win streak and earn their first victory on the road since they defeated the Raiders 20-9. Nagy is also making his return to the Chicago sideline after clearing the league’s COVID-19 protocols, though offensive coordinator Bill Lazor is still expected to continue play-calling responsibilities.

MORE: Who is Khalil Herbert?

Rookie quarterback Justin Fields — coming off a game in which he rushed for 103 yards with a touchdown in his team’s 33-22 loss to the 49ers — is expected to rely on his rushing ability to help the offense gain momentum. The Bears will continue to use running back Khalil Herbert, who rushed for 72 yards last week. He will also have several scoring opportunities.

While the Bears’ offense improves throughout the season, Fields has consistently struggled against defenses that effectively pressure quarterbacks. To that end, Steelers linebacker T.J. Watt leads the Steelers with 8.5 sacks, followed by Cameron Heyward with 2.5. It will be worth monitoring not only how Fields’ line protects him but also how he performs in the face of pressure.

Steelers veteran quarterback Ben Roethlisberger is 0-3 in his last three contests against the Bears. He’ll rely on rookie running back Najee Harris to dominate the Bears’ defense and potentially earn his first win against the Chicago franchise since 2005. During their 13-10 victory against the Browns last week, Harris rushed for 92 yards on 26 carries with a touchdown.

MORE: Will Matt Nagy be fired by the Bears?

Sporting News is tracking scoring updates and highlights from Bears vs. Steelers on “Monday Night Football.” Follow below for live updates and coverage of the NFL Week 9 prime-time game.

9:01 p.m.: TOUCHDOWN STEELERS. Roethlisberger completes to Freiermuth for a four-yard score. Steelers lead 14-0 with 13:22 remaining in the second quarter.

8:57 p.m.: Roethlisberger finds Johnson for 11 yards to give the Steelers a first down from the nine.

8:52 p.m.: Najee Harris converts with a one-yard rush on fourth down and gives the Steelers a first down at the Bears’ 25 to end the first quarter.

8:50 p.m.: INTERCEPTION, STEELERS. Cameron Heyward picks off a pass from Fields at the Bears’ 36.

8:47 p.m.: Montgomery rushes for 22 yards to give the Bears a first down at the 33. He rushes for another two yards on the following play.

8:42 p.m.: Robert Quinn sacks Roethlisberger for a loss of five yards. Roethlisberger throws an incomplete pass on third down and forces the Steelers to punt at the 49.

8:35 p.m.: David Montgomery makes a catch at the 15 for a six-yard gain but are short of a first down. The Steelers take over at their own 36 following the punt.

8:30 p.m.: Derek Watt tackles Jakeem Grant on the return. Bears will start their second drive from their own 11.

8:25 p.m.: TOUCHDOWN STEELERS. Najee Harris rushes into the end zone for 10 yards to put the Steelers on the board. After the extra point, Steelers lead 7-0 with 9:42 remaining in the first quarter.

8:23 p.m.: Roethlisberger finds Claypool and throws a deep pass down the sideline for a 26-yard gain. Steelers move the chains down to the Bears’ 25.

What channel is Bears vs. Steelers on today?

The Bears and Steelers will wrap up Week 9 on ESPN with Steve Levy, Brian Griese, and Louis Riddick calling the game in the booth. Lisa Salters will handle sideline reporting duties; John Parry will provide rules analysis on the broadcast.

There won’t be a Manningcast this week on ESPN2, marking the first time in three weeks Peyton and Eli will take the week off.

Streamers will be able to watch the game via WatchESPN, the ESPN app or by using fuboTV, which comes with a seven-day free trial. Meanwhile, viewers in Canada can watch the game on DAZN free with a 30-day trial.

“Monday Night Football” airs on ESPN, so it will be available to stream live on all of the company’s digital platforms (ESPN.com, ESPN App, etc.). This will be the easiest way for viewers with cable or satellite to view the game.