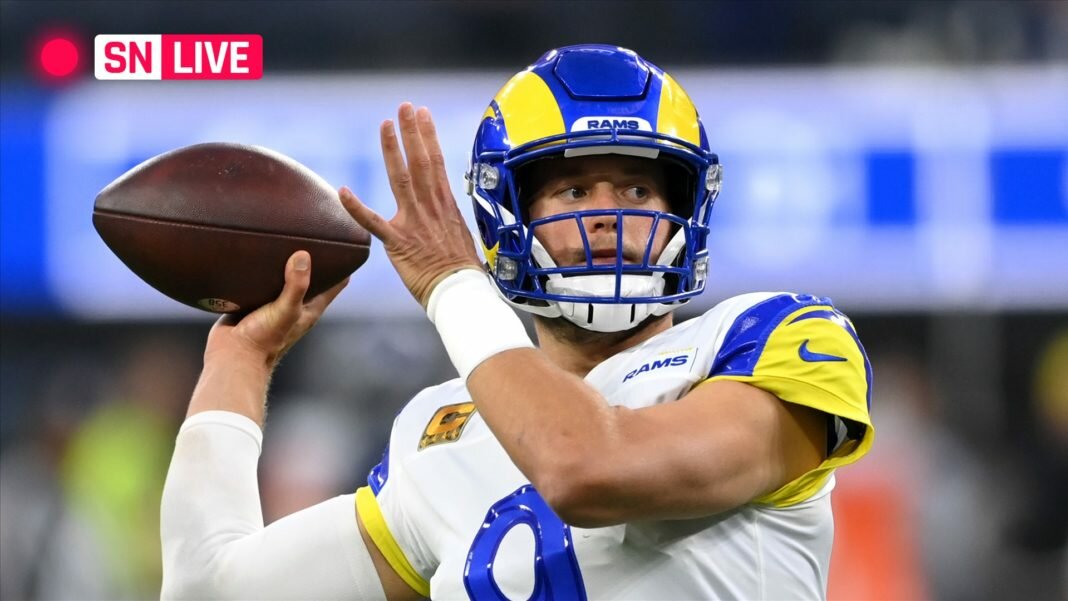 The Rams travel north to face the 49ers in an NFC West battle on “Monday Night Football.” If Los Angeles earns the victory in the Week 10 matchup, it will be tied with the Cardinals atop the division at 8-2.

LA will be counting on quarterback Matthew Stafford, who is coming off a two-interception game in a Week 9 loss to the Titans. No. 1 wide receiver Cooper Kupp and new wideout Odell Beckham Jr. will be his main targets. Beckham will be making his Rams debut after signing with the team Thursday. No. 2 receiver Robert Woods is out for the season after he suffered a torn ACL in practice Friday. Kupp leads the NFL with 1,019 receiving yards and 10 receiving touchdowns.

Stafford, however, will be going up against the NFL’s top-ranked pass defense. End Nick Bosa leads the 49ers with seven sacks and 12 tackles for loss.

49ers quarterback Jimmy Garoppolo threw for a season-high 326 yards, with two touchdowns and an interception, in the team’s 31-17 loss to the Cardinals last week. He connected with tight end George Kittle on six receptions for 109 yards and a touchdown, and he found wide receiver Brandon Aiyuk six times for 89 yards and a touchdown. Deebo Samuel leads the 49ers with 882 receiving yards.

The Rams have linebacker Von Miller available to pressure Garoppolo. Miller is making his LA debut, as well; he sat out last week’s game with an ankle injury after being acquired from the Broncos at the NFL trade deadline Nov. 2. Leonard Floyd is the Rams’ sack leader with 7.5. All-Pro defensive tackle Aaron Donald is next with six.

LA enters the game as a 3 1/2-point road favorite, according to FanDuel.

Sporting News is tracking live scoring updates and highlights from 49ers vs. Rams on “Monday Night Football.” Follow below for complete results from the NFL Week 10 prime-time game.

9:54 p.m.: Garoppolo throws his first incomplete pass of the night on third down.

9:50 p.m.: Wilson is brought down by Miller and Donald for a loss of six yards.

9:42 p.m.: Hufanga bats down a pass intended to Henderson and forces the Rams to punt from the 37.

9:40 p.m.: Rapp sacks Garoppolo for a loss of three yards, and forces the first punt from the 49ers. Rams open the second half at their own 20.

9:19 p.m.: Rams fake a field-goal attempt as Bekker fires a short right pass to Blanton for a gain of two yards. Jones makes the stop and allows the 49ers to take over from the 15 with 12 seconds remaining in the half.

9:13 p.m.: Henderson rushes 11 yards to give the Rams a first down inside the 20 just before the two-minute warning.

8:59 p.m.: Garoppolo completes to Samuel on the following play for a 20-yard gain. Mitchell picks up another 13 yards to give the 49ers a first down at the Rams’ 31.

8:54 p.m.: Aaron Donald makes the stop for the Rams on third down by bringing down Mitchell for a loss of two yards. After Floyd gets called for an offsides penalty, the 49ers convert for a first down at their own 22.

8:38 p.m.: PICK-SIX, 49ERS. A pass from Stafford bounces out of Higbee’s hands, and Ward is there to make the pick at the 27 and rushes into the end zone for the score. The interception marks Stafford’s fourth pick in two games. 49ers lead 14-0 with 49 seconds remaining in the first quarter.

8:34 p.m.: Andrew Whitworth gets called for a personal foul penalty that pushes the Rams back to their own 16.

8:17 p.m.: Stafford connects with Beckham Jr. on the opening pass for a five-yard gain.

What channel is 49ers vs. Rams on today?

49ers vs. Rams will be televised nationally on ESPN. Steve Levy, Brian Griese and Louis Riddick will broadcast the “Monday Night Football” game from the booth. Lisa Salters will report from the sidelines.

The Manningcast rreturns in Week 10. Of note, the Manningcast Curse is probably as real as the Madden Curse, but Josh Allen’s Bills losing to the Jaguars in Week 9 is hard to ignore.

Viewers in Canada can watch the game on DAZN free with a 30-day trial.

As this is a West Coast matchup, the game will kick off at 5:15 p.m. local time, but it have the standard “Monday Night Football” 8:15 p.m. ET kickoff time.